This week we spotted reality TV star Stephanie Pratt (Made in Chelsea) promoting ‘Konjac Root’ tablets on her Instagram account. She’s also selling a Stephanie Pratt branded version of the pills on her website ‘ Nutrition by Steph’. She describes the Konjac Root as ‘an all-natural appetite suppressant’ and a ‘natural gastric band’. 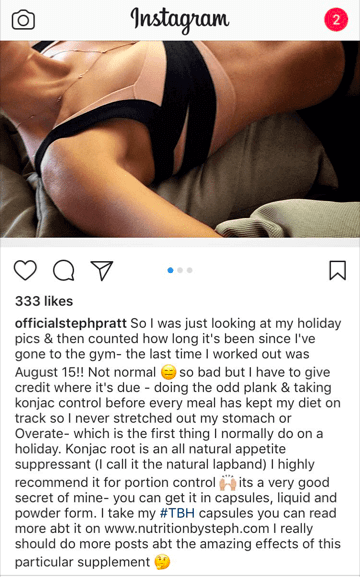 Steph Pratt is not overweight, far from it; she’s worked as a model and her account is filled with messages admiring her body and appearance. For celebrities in this position to promote appetite suppression and weight loss when they themselves are a healthy weight is misguided and downright irresponsible. It’s so important that this nonsense is called out as more and more young women are reporting to have developed disordered eating patterns as a result of following extreme diet advice from glamorous Instagram accounts. 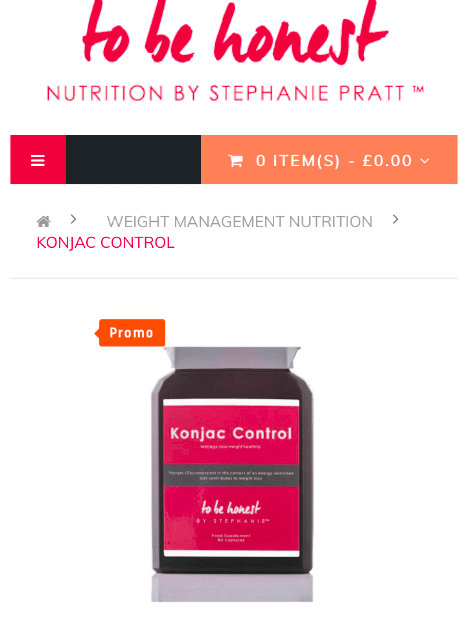 Aside from this, the description of Konjac is slightly misleading. Konjac is an Asian plant, and its root contains a type of carbohydrate known as glucomannan. Although there is some preliminary data that Konjac may suppress appetite through the production of SCFA by gut bacteria this link isn’t confirmed. Glucomannan is a type of fibre; it cannot be digested like other carbohydrates in the small intestine and is fermented in our colon by bacteria. Recently the EFSA decided there was enough scientific evidence authorise the sale of glucomannan as a product which could ‘promote weight loss when combined with a calorie restricted diet in the overweight’.

The idea that fibre can promote weight loss isn’t new or exclusive to glucomannan. How exactly fibre promotes weight loss isn’t known yet but some of the theories include: (1) calorie displacement; as explained above fibre isn’t absorbed into our blood like other carbs so could allow you to feel full after consuming fewer calories than you would after eating absorbable carbs. (2) Fibre makes the contents of our gut thicker after a meal, slowing the rate of digestion, which could help make us feel fuller for longer.

The current recommendation for fibre in the UK is 30g, according to the latest National Diet and Nutrition Survey the average British person eats around 13g/day, which is nowhere near enough. Although most of us need to increase our fibre intake, a qualified dietitian or nutritionist would never recommend taking fibre supplements instead of eating fibre rich foods (fruit, vegetables, grains) which will provide you with essential vitamins and minerals in addition to the fibre, and most importantly, they taste good!

To boost your fibre intakes you don’t need to splash out on fibre supplements, just up your intake of foods high in fibre including fruits, veg, grains and legumes. Also be very very cautious of any Instagram accounts promoting extreme diets or products that cause rapid weight loss or suppressed appetite! Long term they will be detrimental to both your physical and mental health!